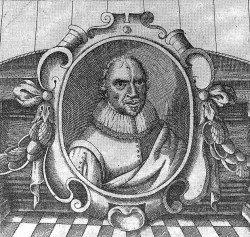 John Taylor spent much of his life working as a Thames waterman, rowing passengers around on the river. He also made some eccentric journeys around the British Isles, often recording them in somewhat heavy verse. He has a humorous style of writing, often regarded as giving a social insight into his times rather than exhibiting a quality of verse. A line of his verse was used for one of the quotations on the promenade.

In a time of pirates along the coast of Norfolk, his visit was not straightforward. Bad weather drove him ashore at Cromer and his reception was not friendly! The latter part of the poem does illustrate the on-going battle that the inhabitants had with the sea. Below is the extract from A Very Merry - Wherry - Ferry Voyage. The poem was published in 1623, so we can imagine that the voyage was made a year or two before that. The picture of John Taylor is from his 1630 poetry anthology.