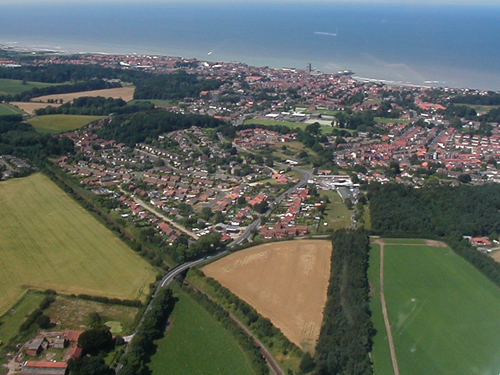 A Dictionary of Cromer and Overstrand History uses photos and drawings to illustrate change over time and endeavours to give some keys features to assist with the dating of historic photos.

There are many aerial photos of the area available since the beginnings of aerial photography in the First World War. The oblique photos presented on this site are from Poppyland Publishing's own photographs, generally taken to provide illustrations for one of our publications.

This set was taken on 20th July 2001. Spotting the difference between these pictures and those on the page for the 2005 pictures is not easy because of the relatively short time period between. However, it does cover the principal period of the Cromer Regeneration programme so some key features on the seafront do change.

On this set you will see the pier prior to the addition of the bar area, the shop and restaurant at the prom end of the pier and the ventilators on the pavilion roof. On the east promenade you'll see the 1950s Rocket House building, now superseded by the current building.

We're able to present these pictures as they are in the copyright of Poppyland Publishing; to see other sets you can look in at Google Maps and Google Earth. On Google Earth at the time of writing there are three sets of vertical photographs of the town, put on in 1999, 2006 and 2007. The dates shown on Google Earth are the dates the pictures were put up rather than the date at which they were taken; we know that the 2007 (the current) images was taken in March 2007 as there are two lifeboats in vision off the end of the pier and that only happened on one day in March when the boats were being exchanged.

Another site for vertical photographs is E-Map Explorer. As well as 1946 aerial photographs of Norfolk available from this site, you can also see other historic maps of the county.